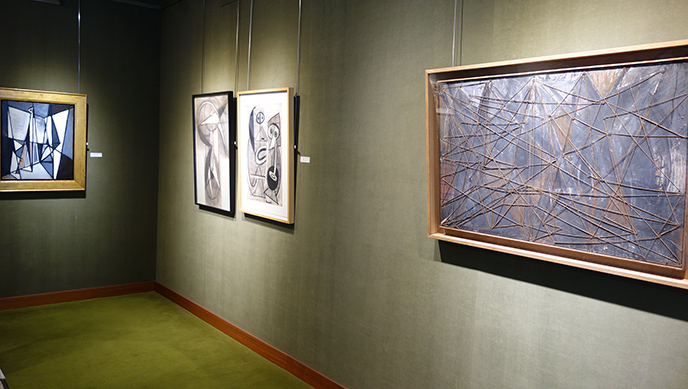 The relationship between J Fin and Sala Dalmau began even before the opening of the gallery, when in 1977 Francesc Draper organized an exhibition at the now defunct Sala Navarro in Barcelona.

When we opened the gallery in 1979, one of our goals was to recover the work of artists close to the avantgardes who weren’t enough appreciated by a major audience or official institutions, hence why the relation between J Fin and Sala Dalmau has been so important. From the beginning we included his work in our group shows dedicated to the avantgardes and the School of Paris.

In 1988, with the help of his widow, Colette Jacquemin, and his brother Javier Vilató, we presented his first solo show with us. “J.Fin, gouaches” focused in his gouaches, a technique he was particularly fond of. The exhibition included a selection of works that went from his abstract year at La Ruche up to the end of his days, when he returns to figuration with strong poetic feeling. The exhibition had great impact and started an interest on the artist in Barcelona. 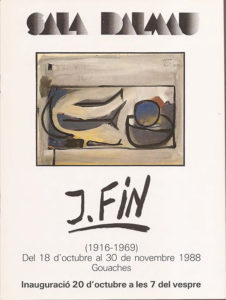 Cover of the catalogue “J.Fín, gouaches” that took place at Sala Dalmau in 1988.

When in 1996 we presented another solo show, we wanted it to be centered exclusively on his still life, a recurring theme trough all his career that he did with very different perspectives all over the years. The exhibition coincided with the donation to MACBA of “Cadires I peixos” (chairs and fishes), one his most relevant still life of the 1960s.

In 2002 we recovered his work again in the exhibition “J.Fín, period 1919-1965”, where we included some works that had been lost for years and that were made in 1939 shortly after leaving Argeles’s refugees camp. Alongside them, we presented a complete vision of his whole career. Those years, his work begins to appear regularly on institutional exhibitions dedicated to the school of Paris and the avantgardes, such as the ones held at the Provincial Museum of Jaen or the Episcopal palace of Malaga. 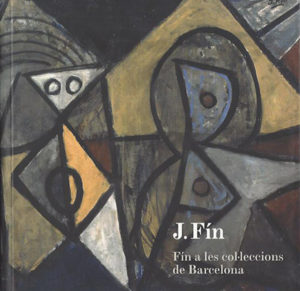 Cover of the catalogue “J.Fín a les col·leccions de Barcelona” that took place at Vila Casas Foundation in 2008.

The relationship between J Fin and Sala Dalmau is not limited to the exhibitions in our gallery, in 2008 we curated a major retrospective at the Vila Casas Foundation: “Fin a les col·leccions de Barcelona” (Fin at Barcelona’s collections), that allowed the audience to see works that hadn’t been seen for years. This show led the Foundation to purchase “Gran cortina”, a 190 x 190 cm piece from his abstract period. That same year, in our gallery we presented “J.Fín els anys de la Ruche”(J.Fin, the Ruche years), dedicated to the four years he lived in the emblematic Parisian building in hard conditions that led him to do a harsh work, close to abstraction and with poor materials.

In 2017 we presented “FIN, el sendero solitario” (Fin, the lonely path) during the Barcelona Gallery Weekend, an international event that allowed us to present his work to an international audience. In the following years, we managed to include his work in relevant institutional exhibitions such as “1939, exilio republicano español”(1939, Spanish Republican exile), at the Arquería de Nuevos Ministerios in Madrid, “De Miró a Barceló. Un siglo de arte español”(From Miró to Barceló, a century of Spanish art), en el Centro Pompidou de Málaga, or “Picasso y el exilio, una historia del arte español de la resistencia” (Picasso and the exile, a story of Spanish art on the resistance) at Les Abbatoirs in Toulouse, among many others, but probably the most relevant event for the consolidation of his work was his entrance at the MNAC, who acquired in 2019 a work from 1949.

This is one of the most relevant pieces of the artist, a severe, austere work that combines painting and collage: “some pushpins hold a lineal framework made of string. The outcome is promising: it disturbs, restless and dazzles”, commented the journalist Lluis Permanyer. The art critic Juan Bufill wrote about it: “a composition where the strokes haven’t been drawn, but marked by strings nailed on wood, quite before Tàpies”. 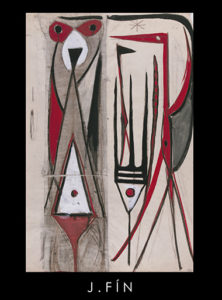 This 2022, the paths of J Fin and Sala Dalmau will unite again with an exhibition that, despite featuring some works from La Ruche, will focus on the works of the 1960s, and among all of them, , “Composición con sillas, instrumentos musicales, aves y peces” (Composition with chairs, musical instruments and birds), a monumental piece of 150 by  325 cm. that hasn’t been seen in 50 years and that was made by the artist in 1965, when he was already severely ill.