From the narrow streets of Gràcia up until the Maria Cristina avenue, Barcelona is a city that breathes art.

As El Periódico points out on their article, Barcelona enjoys a privileged position in the European cultural ranquings. Ninth is the position granted by the European Commission based in the criteria of creativity, investigation and knowledge. It is not for the less, as Barcelona is the only city in the world with nine monuments considered as World Heritage by the Unesco.

Therefore, it is not strange that any art lover wants to dedicate their spare time to discover the secrets hidden in this award-winning city. With this article, we want to suggest some of the right places to do it.

The Antoni Tàpies Foundation is at Aragon St. 255 and was founded by the artist himself in 1985 with the purpose of promoting the knowledge of modern and contemporary art, as well as spread the life and art of this Catalan artist.

Over the years, its programming has included the works of artists such as Harun Farocki, Maria Lassnig, Allan Krapow or Kerry James Marshall, in many cases showing their art for the first time in Barcelona and offering an eclecticism in their exhibitions, encompassing from figurative painting to video art and performance.

The Casa Garriga Nogués is the home of the Mapfre Foundation in Barcelona since 2015 and presents some of the most interesting exhibitions on a private space in town, up ‘til now focused on photography and the beginnings of the pictorial modernity. The building had housed before the Godia foundation, therefore its link with art is not something new. The work of the architect Enric Sagnier, the building was a commission of the banker Rupert Garriga-Nogés.

Situated at Diputació 250, Casa Garriga Nogués has collaborated with several major Catalan culture institutions, as it’s pointed on their website. But what causes a greater impact to visitors is its exhibiting space: 2.700 square meters surrounded by different architectural styles such as rococo, neoclassicism or modernism.

Consell de Cent, is one of the historical streets of Barcelona, and it goes along three of the districts of the city. For decades, this has been the street of the galleries, the place to see the work of young emerging artists as well as pieces by the more renowned artists of the avant-gardes. Nowadays, lifelong galleries coexist with the newer ones, offering a transversal vision of the art world. 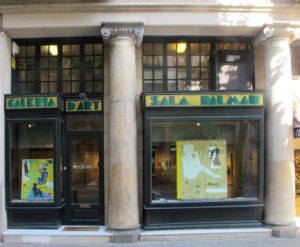 If you decide to take a stroll through its sidewalks and at 349, you will find our gallery, one of the few that combines the avant-gardes and modern as well as contemporary art.

Established in 1979, Sala Dalmau has presented exhibitions of Spanish and international artists, showing several historical tendencies in the world of art, such as the avant-gardes or Constructivism. The gallery has received two ACCA Awards (Catalan Art Critics Guild) and in 2017, Mariana Draper, director of the gallery, was awarded with the GAC of honor lifetime achievement.

At Sala Dalmau we have always tried to give our exhibitions a great didactic dimension accompanying them with selected documents: vintage photos, catalogues, art reviews etc. All with the idea of offering the public a wider vision of the artist and their historical context.

Close to it it’s the Casa Batlló, one of the best known Gaudí buildings. Together with the Casa Ametller by Josep Puig i Cadafalch and the Casa Lleó Morera by Lluís Domènch i Muntaner, make up what was known by their time as the “manssana de la discòrdia” (block of discord), defining the rivalry of the three architects and the respective facades of their buildings.

These three constructions, located one by another at Passeig de Gràcia between the streets Consell de Cent and Aragó are true lesson of Modernist architecture and are possibly the most spectacular architectonic set in the city. As of now, the Casa Ametller and the Casa Batlló offer all kind of guided visits that turn them in one of ghe greatest attractions in town.

The emblematic Pedrera is a must if you want to know the Barcelonese art and culture. It’s in the center of the city, Passeig de Gràcia 92,and offers personalized visits for groups as well visits for the regular public, day or night.

In this iconic building we can discover its patios and be astonished by its picturesque and spectacular façade. Besides the visit to the building itself, La Pedrera presents one of the most interesting showrooms in town that often is overlooked due to the power of the construction itself.

And, by last what can be better than finishing our cultural trip enjoying a white wine in one of the best views in Barcelona? The Mandarin Oriental Hotel offers you its terrace, situated in the middle of Passeig de Gràcia. If you are interested and want to know more, check their menu to see what can offer you one of the best valued hotels in town.

Don’t think it twice and give yourself a cultural treat, it won’t be wasted time, but invested. As the English poet Matthew Arnold said: “Culture is the knowledge of the best that has been said and done in the word”.