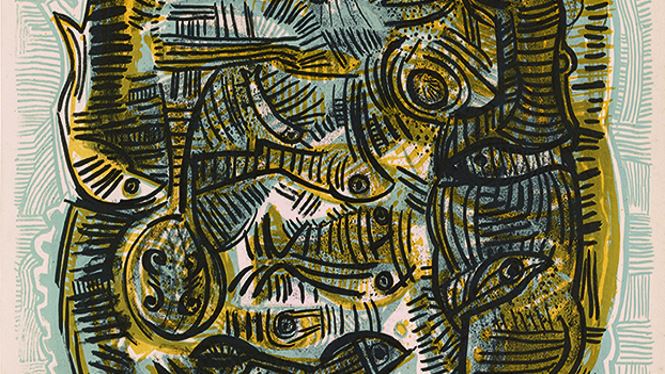 From October 26th and until the next 17th of January, the Picasso Museum of Barcelona presents the exhibition “ The shared studio. Picasso, Fín, Vilató, Xavier ”, showing the work as engraves made by Picasso, his nephews J.Fín and Javier Vilató and of Xavier, son of VIlató.

J.Fín and Vilató have been artists of our gallery for decades. Members of the School of Paris, the graphic arts were for them an important part of their artistic expression from the beggining of their career in the Barcelona of the post-Civil War , when they presented together alongside Alberto Fabra and Pierrette Gargallo the exhibition “24 grabados” (24 engravings) at the Reig galleries.

In 1939, they escape to France after the Spanish Civil War and are inmates at the Argeles refugee’s camp. Picasso will rescue them and although these are extremely hard moments on a personal level, they had the privilege of investigate the world of graphic arts alongside their uncle at the Lacourière Frélaut studio. This experience will reinforce their interest on this technique, often considered minor, and they will continue working on it for the rest of their career.

Fín would work on several series of engravings, such as the surrealist “El fafarreo”, or the ones dedicated to bullfighting, he would even present solo exhibitions dedicated exclusively to engravings. In his later years, when he was extremely sick and without strength, graphic arts had a great importance in his work, with a new series focusing on the theme of horses.

After his death, International art fairs focused on graphic arts such as Estampa in Madrid or Saga in France, have features his work.Currently, a great part of his production is at the Biblioteca Nacional de Catalunya (Catalonia’s National Library) thanks to a donation of the family of the artist

Vilató also had a special interest in graphic art. He concentrated a lot into it all through his career. He presented several exhibitions dedicated solely to engraving and in recognition to his mastery as engraver, by the end of the decade of the 60s he was appointed as member of the Societé des Peintres Graveurs Français.

In 1994, the Museo del Grabado Español Contemporáneo (Spanish Museum of contemporary engraving), located in Marbella, opened the Vilató Room, that presents a selection of his works as well as prints, matrixesand several tools used by him.